Not retro, but vintage. 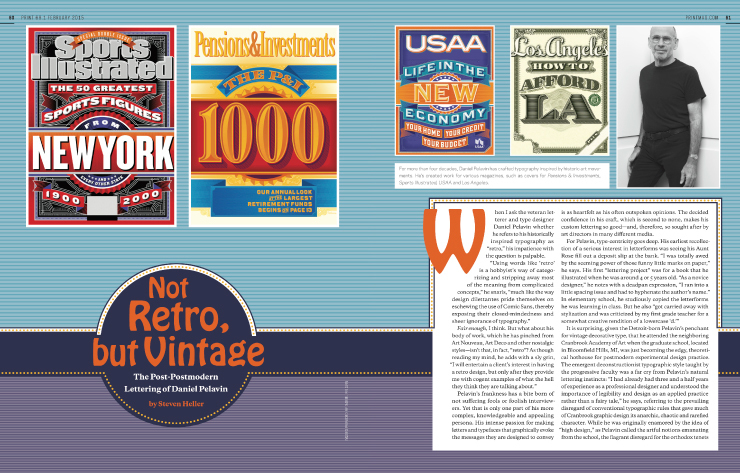 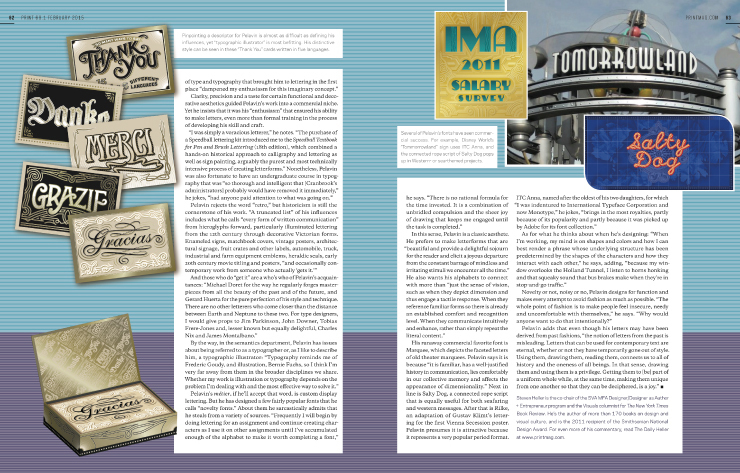 The images above left express my feelings to Steven Heller and Print's kind editor Zachary Petit. 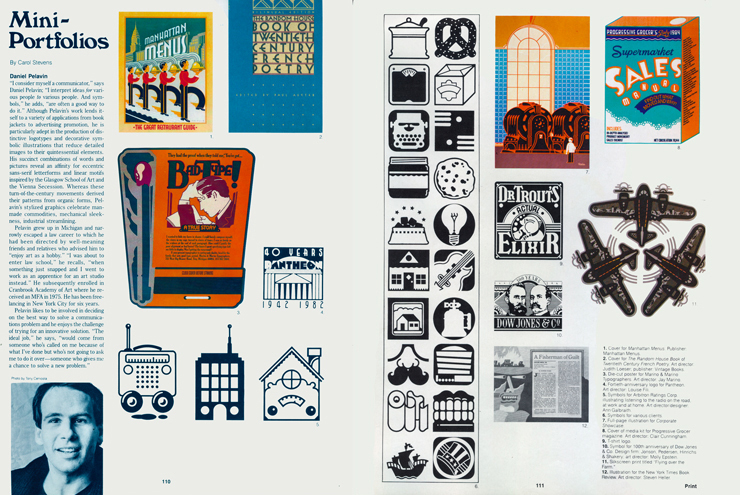 Print magazine Mini-Portfolio article of 30 year ago, dispelling the myth that "lightning never strikes twice in the same place."
I'm pleased to be featured in the latest Print Magazine. It's a special Typography issue and includes nearly all the letters of the Roman alphabet as well as Cyrillic and Hebrew among others. The amazing Steven Heller took, what was probably for him a brutally mind-numbing interview and turned it into a delightful story that will tear at your heartstrings and probably have me kvelling for the next six months. I am eternally grateful to Steve for making me look considerably better than I am in real life.    The issue has much more to offer than article about an outspoken, veteran letterer and type designer with a bit of attitude. In addition to essays by eight of the top minds in the field, I discovered 9 young type designers to watch and was treated to an article on the future of typography. I was encouraged to learn that some designers today are beginning to adopt my practice of collecting the characters I create for assignments and turning them into fonts.   This article has a special significance here for me. It is my first appearance in Print since the Mini-Portfolio 30 years ago that got me started on my meteoric rise to fame.

I'm pleased to be featured in the latest Print Magazine. It's a special Typography issue and includes nearly all the letters of the Roman alphabet as well as Cyrillic and Hebrew among others. The amazing Steven Heller took, what was probably for him a brutally mind-numbing interview and turned it into a delightful story that will tear at your heartstrings and have me kvelling for the next six months.

The issue has much more to offer than an article about a veteran letterer and type designer with attitude. In addition to essays by eight of the top minds in the field, I discovered 9 young type designers to watch and was treated to a glimpse into the future of typography where I was encouraged to find designers today beginning to adopt my practice of collecting the characters I create for assignments and turning them into fonts.

This article has a special significance here for me. It is my first appearance in Print since the Mini-Portfolio 30 years ago that got me started on my meteoric rise to fame. Full text follows:

Not Retro but, Vintage

The Post-Postmodern Lettering of Daniel Pelavin

When I ask the veteran letterer and type designer Daniel Pelavin whether he refers to his historically inspired typography as “retro,” his impatience with the question is palpable.

“Using words like ‘retro’ is a hobbyist’s way of categorizing and stripping away most of the meaning from complicated concepts,” he snarls, “much like the way design dilettantes pride themselves on eschewing the use of Comic Sans, thereby exposing their closed-mindedness and sheer ignorance of typography.”

Fair enough, I think. But what about his body of work, which he has pinched from Art Nouveau, Art Deco and other nostalgic styles—isn’t that, in fact, “retro”? As though reading my mind, he adds with a sly grin, “I will entertain a client’s interest in having a retro design, but only after they provide me with cogent examples of what the hell they think they are talking about.”

Pelavin’s frankness has a bite born of not suffering fools or foolish interviewers. Yet that is only one part of his more complex, knowledgeable and appealing persona. His intense passion for making letters and typefaces that graphically evoke the messages they are designed to convey is as heartfelt as his often outspoken opinions. The decided confidence in his craft, which is second to none, makes his custom lettering so good—and, therefore, so sought after by art directors in many different media.

For Pelavin, type-centricity goes deep. His earliest recollection of a serious interest in letterforms was seeing his Aunt Rose fill out a deposit slip at the bank. “I was totally awed by the seeming power of those funny little marks on paper,” he says. His first “lettering project” was for a book that he illustrated when he was around 4 or 5 years old. “As a novice designer,” he notes with a deadpan expression, “I ran into a little spacing issue and had to hyphenate the author’s name.” In elementary school, he studiously copied the letterforms he was learning in class. But he also “got carried away with stylization and was criticized by my first grade teacher for a somewhat creative rendition of a lowercase ‘d.’”

It is surprising, given the Detroit-born Pelavin’s penchant for vintage decorative type, that he attended the neighboring Cranbrook Academy of Art when the graduate school, located in Bloomfield Hills, MI, was just becoming the edgy, theoretical hothouse for postmodern experimental design practice. The emergent deconstructionist typographic style taught by the progressive faculty was a far cry from Pelavin’s natural lettering instincts: “I had already had three and a half years of experience as a professional designer and understood the importance of legibility and design as an applied practice rather than a fairy tale,” he says, referring to the prevailing disregard of conventional typographic rules that gave much of Cranbrook graphic design its anarchic, chaotic and rarefied character. While he was originally enamored by the idea of “high design,” as Pelavin called the artful notions emanating from the school, the flagrant disregard for the orthodox tenets of type and typography that brought him to lettering in the first place “dampened my enthusiasm for this imaginary concept.”

Clarity, precision and a taste for certain functional and decorative aesthetics guided Pelavin’s work into a commercial niche. Yet he insists that it was his “enthusiasm” that ensured his ability to make letters, even more than formal training in the process of developing his skill and craft. “I was simply a voracious letterer,” he notes. “The purchase of a Speedball lettering kit introduced me to the Speedball Textbook for Pen and Brush Lettering (18th edition), which combined a hands-on historical approach to calligraphy and lettering as well as sign painting, arguably the purest and most technically intensive process of creating letterforms.” Nonetheless, Pelavin was also fortunate to have an undergraduate course in typography that was “so thorough and intelligent that [Cranbrook’s administrators] probably would have removed it immediately,” he jokes, “had anyone paid attention to what was going on.”

Pelavin rejects the word “retro,” but historicism is still the cornerstone of his work. “A truncated list” of his influences includes what he calls “every form of written communication” from hieroglyphs forward, particularly illuminated lettering from the 12th century through decorative Victorian forms. Enameled signs, matchbook covers, vintage posters, architectural signage, fruit crates and other labels, automobile, truck, industrial and farm equipment emblems, heraldic seals, early 20th century movie titling and posters, “and occasionally contemporary work from someone who actually ‘gets it.’”

And those who do “get it” are a who’s who of Pelavin’s acquaintances: “Michael Doret for the way he regularly forges masterpieces from all the beauty of the past and of the future, and Gerard Huerta for the pure perfection of his style and technique. There are no other letterers who come closer than the distance between Earth and Neptune to these two. For type designers, I would give props to Jim Parkinson, John Downer, Tobias Frere-Jones and, lesser known but equally delightful, Charles Nix and James Montalbano.”

By the way, in the semantics department, Pelavin has issues about being referred to as a typographer or, as I like to describe him, a typographic illustrator: “Typography reminds me of Frederic Goudy, and illustration, Bernie Fuchs, so I think I’m very far away from them in the broader disciplines we share. Whether my work is illustration or typography depends on the problem I’m dealing with and the most effective way to solve it.”

Pelavin’s meÌtier, if he’ll accept that word, is custom display lettering. But he has designed a few fairly popular fonts that he calls “novelty fonts.” About them he sarcastically admits that he steals from a variety of sources. “Frequently I will begin by doing lettering for an assignment and continue creating characters as I use it on other assignments until I’ve accumulated enough of the alphabet to make it worth completing a font,” he says. “There is no rational formula for the time invested. It is a combination of unbridled compulsion and the sheer joy of drawing that keeps me engaged until the task is completed.”

In this sense, Pelavin is a classic aesthete. He prefers to make letterforms that are “beautiful and provide a delightful sojourn for the reader and elicit a joyous departure from the constant barrage of mindless and irritating stimuli we encounter all the time.” He also wants his alphabets to connect with more than “just the sense of vision, such as when they depict dimension and thus engage a tactile response. When they reference familiar forms so there is already an established comfort and recognition level. When they communicate intuitively and enhance, rather than simply repeat the literal content.”

His runaway commercial favorite font is Marquee, which depicts the faceted letters of old theater marquees. Pelavin says it is because “it is familiar, has a well-justified history in communication, lies comfortably in our collective memory and affects the appearance of dimensionality.” Next in line is Salty Dog, a connected rope script that is equally useful for both seafaring and western messages. After that is Rilke, an adaptation of Gustav Klimt’s lettering for the first Vienna Secession poster. Pelavin presumes it is attractive because it represents a very popular period format. ITC Anna, named after the oldest of his two daughters, for which “I was indentured to International Typeface Corporation and now Monotype,” he jokes, “brings in the most royalties, partly because of its popularity and partly because it was picked up by Adobe for its font collection.”

As for what he thinks about when he’s designing: “When I’m working, my mind is on shapes and colors and how I can best render a phrase whose underlying structure has been predetermined by the shapes of the characters and how they interact with each other,” he says, adding, “because my window overlooks the Holland Tunnel, I listen to horns honking and that squeaky sound that bus brakes make when they’re in stop-and-go traffic.”

Novelty or not, noisy or no, Pelavin designs for function and makes every attempt to avoid fashion as much as possible. “The whole point of fashion is to make people feel insecure, needy and uncomfortable with themselves,” he says. “Why would anyone want to do that intentionally?”

Pelavin adds that even though his letters may have been derived from past fashions, “the notion of letters from the past is misleading. Letters that can be used for contemporary text are eternal, whether or not they have temporarily gone out of style. Using them, drawing them, reading them, connects us to all of history and the oneness of all beings. In that sense, drawing them and using them is a privilege. Getting them to [be] part of a uniform whole while, at the same time, making them unique from one another so that they can be deciphered, is a joy.”