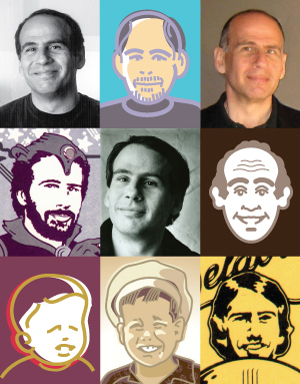 Reelin' in the years

Daniel Pelavin grew up in Detroit, Michigan, trained as an apprentice in local art studios and began practicing in the days when Adobe was primarily known as construction material. From his earliest work, produced using templates, french curves and drafting tools, to a present day virtuosity in digital media, Pelavin has used a restrained and simplified vocabulary of geometric forms, rich, flat colors and letterforms inspired by a wide range of 20th century cultural ephemera. His work, which encompasses illustration, typographic and icon design has been the subject of articles in books and magazines. He is an instructor of illustration, design and lettering, an author of articles on design practice and education and has presented his work to design organizations and universities throughout the United States and New Jersey. He earned his BA in advertising and MFA in graphic design but, credits high school industrial arts classes and studio apprenticeships as his most valuable source of training and inspiration.