Los Angeles as I imgined it would look above and as it actually looks below. 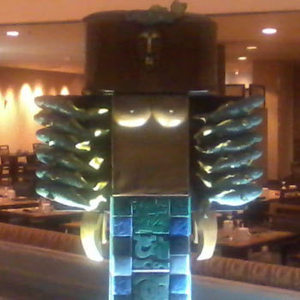 I went to Los Angeles last week, was picked up at LAX by my amazing nephew Anthony. After dropping off stuff at the hotel, we headed straight to Wurstküche, for a few pints of Weihenstephan Dunkelweizen, Belgian fries and grilled sausages. Monday morning, 4999 other geeks and I were treated to a 40 projector sound and light show and the news that the Cloud was here to stay. (My 2¢: if you make your living with the software, don’t bitch about paying for it).

That afternoon, I was interviewed for a video to go up on the Adobe creative community site by a real crew with a boom microphone, light reflectors and even someone to make my face less shiny. More about that when it’s finished. Following that heady experience, I was a fortunate guest at a red carpet media reception where I mixed and mingled with Adobe executives, customers, partners and (other?) influential designers.

On Tuesday, following another two-hour keynote session which included powerful presentations by Paula Scher and Ray Legato, I was walking through the convention center minding my own business, and was tapped for a random interview by Soul Pancake (SP: What inspires you to create? DP: Remembering I have to pay my rent) during which I, embarrassingly, had to answer my cellphone (the only one at the whole convention that wasn’t an iPhone BTW) which provided some amusing results later that evening.

My niece Julianna, who proves that beauty and strength can coexist in harmony, drove up from Encinitas that evening. I figured we’d just go out for dinner but, through the incredible good graces of the folks at Adobe, we both got to attend MAX Bash, an outdoor extravaganza that superlatives fail to do justice. Suffice it to say that there was food and beverage in abundance, accompanied by aerial acrobatics, light shows and a host of pink piggy piñatas among much other interesting stuff.

A little ways into the soiree, I noticed that people were giving me odd looks and then started coming up and saying “Hey you’re the guy who answered his phone in the interview! (they actually left that in) You were great!” I had left the auditorium early to meet my niece and had no idea it was going to be shown to the entire conference. My 15 minutes of fame. The evening was capped off by Julianna and I finding ourselves about 20 feet from the stage, blasted into bliss by the Black (Oh oh-oh-oh, I got a lover who keeps me waiting) Keys.

Wednesday afternoon was the day of my presentation, which ran on time, under budget and kept people in their seats for the entire period despite way too many "ums" (mostly because they were waiting to see if the raffle tickets they were holding would win one of the cheesy prizes I promised).

Within minutes of completing the task I had been dreading since February, and again by the good graces of my nephew, I was headed to Venice Beach (sort of a cross between the West Village and Coney Island) to Larry's where a delightful glass of stout with just a hint of chocolate accompanied by a wild arugula and fig salad prepared me for the red eye flight back to JFK with sufficient time at gate 42B to do the sketches that were due when I returned the next morning.

Many, many thanks to Terry Hemphill who invited me, Brenda Sutherland who introduced me to Terry, Jeffery Severtson, Julie Campagna, Stefan Gruenwedel, and Lisa Hanna who made me believe I actually had something worth saying, Gerard Huerta, Michael Doret, Louise Fili, Matt Strelecki, Ken Barber, Chris Spollen, Ilene Strizver, Rachael Ray, Steven Heller. Jonathan Hoefler, José Cruz, and anyone else who was either slandered or inadvertently omitted.